The Sun and the Greenhouse Effect 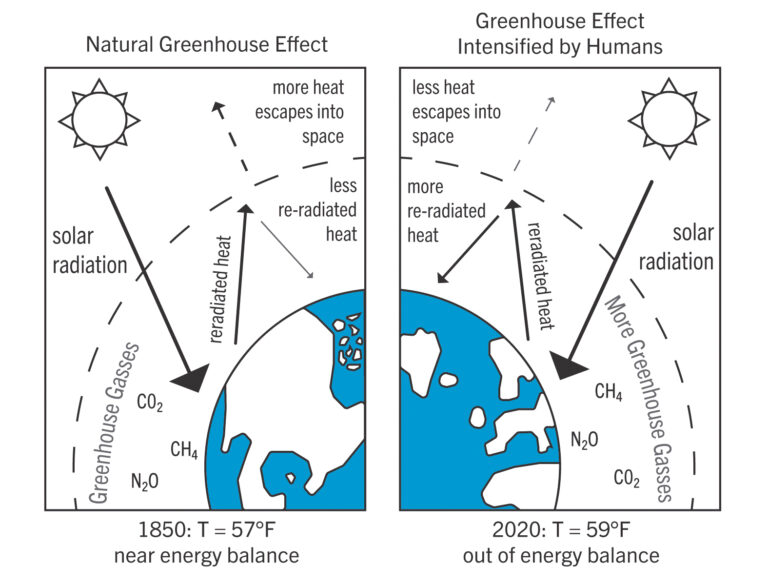 Earth’s position in the solar system is sometimes described by the Goldilocks principle. Earth is not too hot (like Venus), nor is it too cold (like Mars). Instead, Earth is just right—it’s the perfect distance from the Sun to allow a temperature suitable for life as we know it to flourish. This seems obvious enough—the principle really just says that planets are hotter if they are closer to the Sun. However, this leads us to an important question: is the distance from the Sun the only thing that determines a planet’s temperature, or are there other influential factors?

Since the nineteenth century, physicists have been developing and improving measurements of how much radiation from the Sun actually strikes the Earth. Given the temperature of the Sun’s surface, the distance between the Sun and Earth, and the tiny fraction of the Sun’s total output that hits the Earth, it is possible to apply basic physics to calculate what Earth’s average surface temperature should be. If these were the only crucial factors, that calculation ought to reasonably match the observed average temperature of 59°F, or 15ºC. But it does not. Instead, the calculation says that the average surface temperature of Earth should be a frigid 5°F, or -15ºC. Something is missing.

That missing something is the atmosphere. The -15°C number comes from what climate scientists call the “bare rock” model of Earth.[1] Although incomplete, it is still very useful to our thinking because it shows that additional factors besides the Earth-Sun distance, the surface temperature of the Sun, and the Earth’s diameter help determine temperature. The next step, then, is to understand something about how the atmosphere is able to trap some solar heat at the surface, thereby raising the temperature by 30°C. This observed feature of our planet—that it is much warmer than the bare rock model predicts—is called the natural greenhouse effect. This principle is the key to unlocking the entire problem of global warming that concerns us.

When sunlight hits Earth’s atmosphere and surface, some of it is reflected straight back into space.  For example, most of the Sun’s radiation that happens to strike any part of Earth’s white ice is reflected right back out. This also happens when sunlight strikes some types of clouds: in this case, part of the incoming radiation never even makes it to the Earth’s surface. None of this reflected sunlight warms the Earth at all. On the other hand, when the solar radiation strikes the dark ocean, most of it is not reflected but absorbed. The ocean accepts the radiation and takes it in, which causes it to warm up. Taking into account the many different variations in the Earth’s atmosphere and surface—water, ice, fields, forests, etc.—it becomes clear that every aspect of Earth’s climate system reflects or absorbs sunlight to its own particular extent.

Climate scientists have calculated that, of the total incoming sunlight that hits all of Earth, 30 percent is reflected and 70 percent is absorbed. This 30 percent is called the reflectivity, or albedo, of the Earth. This is a phenomenon we all likely have personal experience with:  if you work outside on a hot sunny day, and you wear a dark T-shirt, you will be warmer than if you were wearing a white T-shirt. The dark shirt absorbs more heat than the white one does.

We have just learned that the 70 percent of the Earth system that absorbs sunlight warms up as a result. That extra heat is transferred throughout the surface and atmosphere (for example, by winds and ocean currents), so the parts of Earth that reflected sunlight warm as well. But notice next that the sunlight, of course, keeps on coming in. Something else must be at work, or else Earth would continue to warm and warm, and indeed would have disintegrated a long time ago. To prevent this, much of the absorbed sunlight is re-emitted back out into space. We can clearly see this phenomenon, using a specialized camera on an orbiting satellite. The Earth is actually glowing: it is emitting radiation (Earthlight) just like the Sun![2] The big difference here is that the Earth, being much cooler than the Sun, emits much lower energy radiation, called infrared radiation, which is too weak to see with the unaided eye. You can, however, feel this exact type of radiation by standing under a heat lamp.

Not all of the absorbed sunlight is re-emitted back to space. Here is where the atmosphere comes in. After Earthlight is emitted from the planet’s surface, some of it is intercepted by greenhouse gases, which in turn emit even weaker radiation in all directions. Some of this weaker radiation does make it out to space, but a lot stays inside the Earth’s climate system, making it permanently warmer than it would be if there were no atmosphere at all. How much warmer? We discussed this above—30ºC of additional warming as compared to that frigid bare rock.

A good analogy for the natural greenhouse effect happens any night when we go to sleep in a cool room under a blanket. Let’s say the room temperature is 60°F and you are most comfortable at 70°F. You choose a certain blanket that absorbs some of the heat that your body radiates out. The blanket re-radiates that heat back down, so the temperature underneath is 70°F, just as you like it. This system—you, the room, and the blanket—is in an energy balance. The temperature under the blanket is warmer than the room, and it is not changing. Given the thickness of the blanket and the temperature outside it, a certain constant fraction of your body heat is radiated back to you, and a certain amount is lost to the room.

With the blanket you chose, the temperature underneath remains at 70°F. Similarly, if the “blanket” of greenhouse gases in the atmosphere were to remain constant, then, in the absence of any other human or natural perturbations, the average Earth surface temperature would also not change—it would stay constant at the present 59°F. The input energy from sunlight would be balanced by the output energy in the form of Earthlight, and the temperature underneath the atmosphere is then determined by how thick the greenhouse blanket is.

Now suppose you add another blanket to the bed. Your local system will adjust—more of your escaping body heat will be radiated back from the thicker blankets, and soon a new energy balance will be reached. Now, however, the temperature under the blanket will be warmer—let’s say it is 80°F. It is starting to get uncomfortably warm with the extra blanket, and so we might want to take it back off. In our bedroom, this is no problem. But when we continue to add to Earth’s greenhouse gas blanket, needless to say, the situation is more problematic.

Since 1850, when the average surface temperature of Earth was only 57°F, the temperature under Earth’s atmosphere has increased by 2°F (about 1.2ºC), mostly from our additions of carbon dioxide and other greenhouse gases to the blanket (Figure 2). Greenhouse gas emissions and deforestation continue, and the Earth, already far out of energy balance, becomes more so with each passing day. The anthropogenic greenhouse effect—the global warming that humans are responsible for—continues to increase.[3] This is our situation today.

[1] Archer, Global Warming, 19-28, describes the layer model of the atmosphere, starting with Earth as a bare rock.

[3] Earth’s energy balance will be discussed in more detail in the first section of Chapter 2.